The impact of foreign aid on migration revisited

With the refugee crisis and the arrival of thousands of migrants on the Southern European coasts, there’s a growing pressure on the European Commission and the most affected EU member states to find a quick way to effectively manage (and stem) migration flows. And many see foreign aid as an essential part of the solution. Indeed, pledges to scale up aid to developing countries are now routinely accompanied by statements arguing that helping countries to develop gives their people an incentive to stay at home. In June 2015, for instance, the UK Defence Secretary declared that “Britain needs to spend more of its budget on helping stabilise countries so that it doesn’t have to ‘fish’ migrants out of the Mediterranean” (The Guardian, 21 June 2015). But does foreign aid really help reduce migration flows?

The link between aid flows and migration is still relatively unexplored empirically. Yet, there appears to be some consensus in the literature that the effect of foreign aid on migration flows is positive, suggesting that the additional income created by Official Development Assistance (ODA) inflows serves the purpose of financing migration costs rather than creating incentives to stay, e.g. through creating additional employment opportunities. Faini and Venturini (1993) postulate that income growth – spurred by aid inflows – may fail to halt emigration because it relaxes credit constraints, which tend to be especially binding in poorer contexts. Berthélemy et al. (2009) also identify a Network Channel through which bilateral aid may be associated with migration flows: more bilateral contacts through the implementation of aid projects increases the available donor country information among potential migrants in the recipient country, which implies lower moving costs for the migrants. Their cross-section estimates indicate that both bilateral aid and total recipient aid have significantly positive impacts on migrant stocks.

In this new research1, we revisit the aid-migration link using a substantially extended and adjusted econometric approach. In contrast to the previous literature, we obtain evidence of a negative relationship between aid and emigration rates which is well summarized in Figure 1, where we simply plot the total amount of annual ODA received by the countries of origin with the corresponding emigration rates (calculated as the total number of emigrants – towards all destinations – over the population of the country of origin). The same negative relationship even holds for the poorer part of recipient countries (Figure 2), which suggests that the budgetary constraint channel – i.e. the impact that additional wealth could have on financing migration costs for a larger share of the population in the countries of origin – does not play a significant role in shaping migration decisions. The econometric analysis supports these simple statistics, indicating a strong causal effect of ODA on emigration rates. The most plausible explanation for these contrasting results is that, unlike in previous studies, we use migrant flows rather than migrant stocks as the dependent variable.

Indeed, the choice of using migration stocks – or the variation in stocks – as a proxy for gross migration flows has important drawbacks which may lead to misleading results. For instance, the stock measure includes migrants who had been living in the countries of destination for decades, which tells little about the influence of recent ODA flows on the decision to migrate. Furthermore, in contrast to emigration rates, which are positive by definition, variations in stocks can take on negative values and are also affected by factors such as return migration, deaths, migration to third countries as well as naturalisation (depending on whether the status of the immigrant is defined according to his or her citizenship) and births (depending on whether ius sanguinis is adopted in the country of destination) (see Beine et al. (2016)).

The main message of the paper is that foreign aid doesn’t play any role in allowing poorer migrants to better afford the migration-related costs, which is at the core of the hypothesis of the hump-shaped pattern of migration (see, for example, Clemens 2014). We also find that, at the level of individual donors, the information or network channel of foreign aid – which is supposed to decrease the moving costs of migrants thanks to the additional information provided by the bilateral contacts through the implementation of aid projects – has a negligible impact.

Taken together, these findings suggest that policymakers in rich countries are right to view foreign aid as an appropriate instrument to curb the flow of migrants, but that they would have to act collectively. It has to be noted, however, that the aggregate results presented here can only provide a very rough guide for policymaking, because of the heterogeneous impacts of different types of foreign aid, which we illustrate by drawing a distinction between the effects of humanitarian and non-humanitarian aid on migrant flows in one of our robustness checks. The results suggest, for instance, that humanitarian aid has an additional positive effect on emigration, which might be attributed to the nature of humanitarian aid as temporary relief that is much less related to the creation of employment and income opportunities. 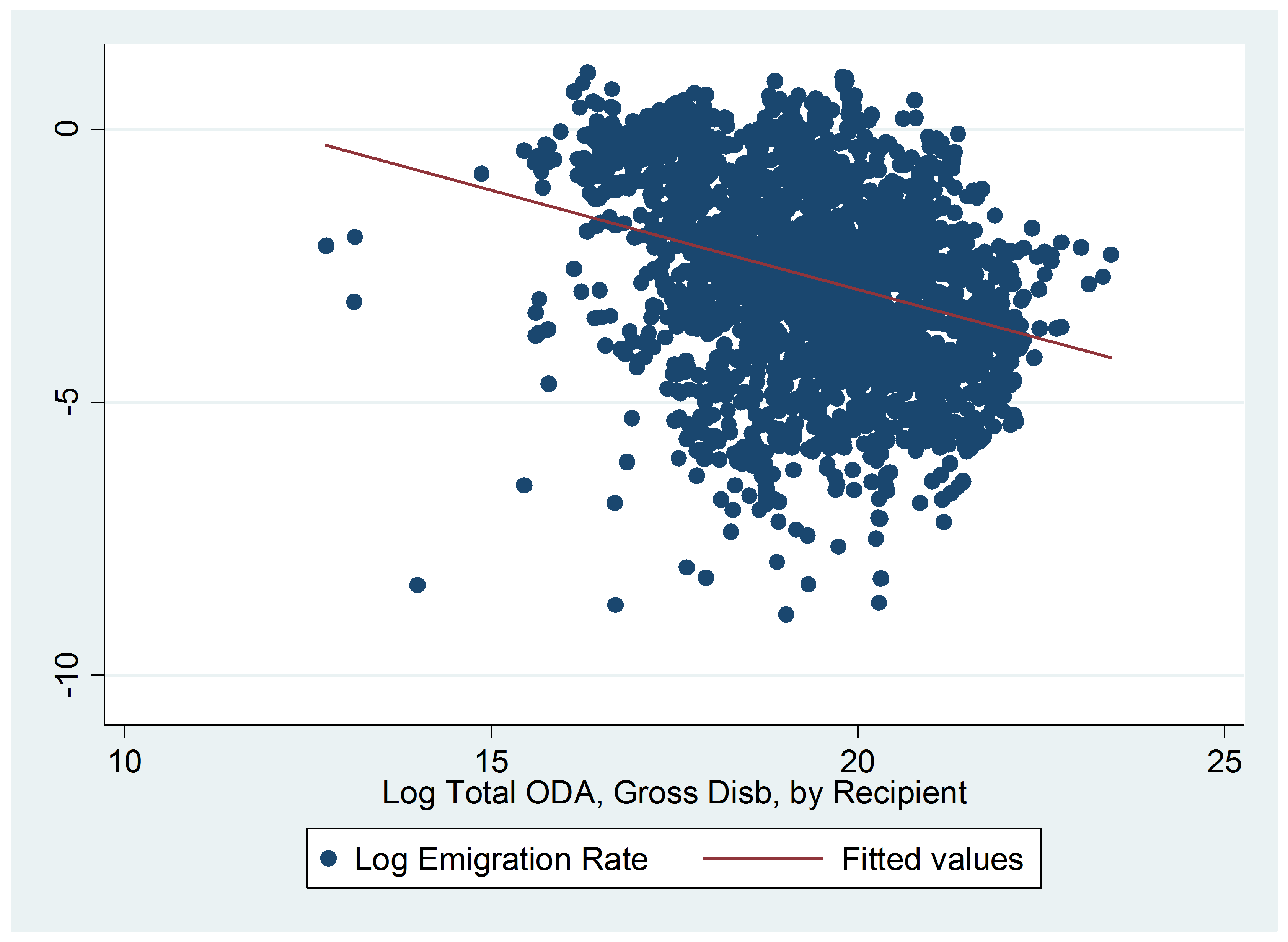 Note: The vertical axis is the log of total emigrants over total population by recipient country (time t). The horizontal axis is the log of total gross ODA received, by recipient (time t). The left-hand side shows the linear relationship, while the right-hand side shows the quadratic trend. The sample is composed of 2,678 observations and the data covers the period 1995-2013

Figure 2: Relationship between ODA and Emigration Rate at different levels of Income 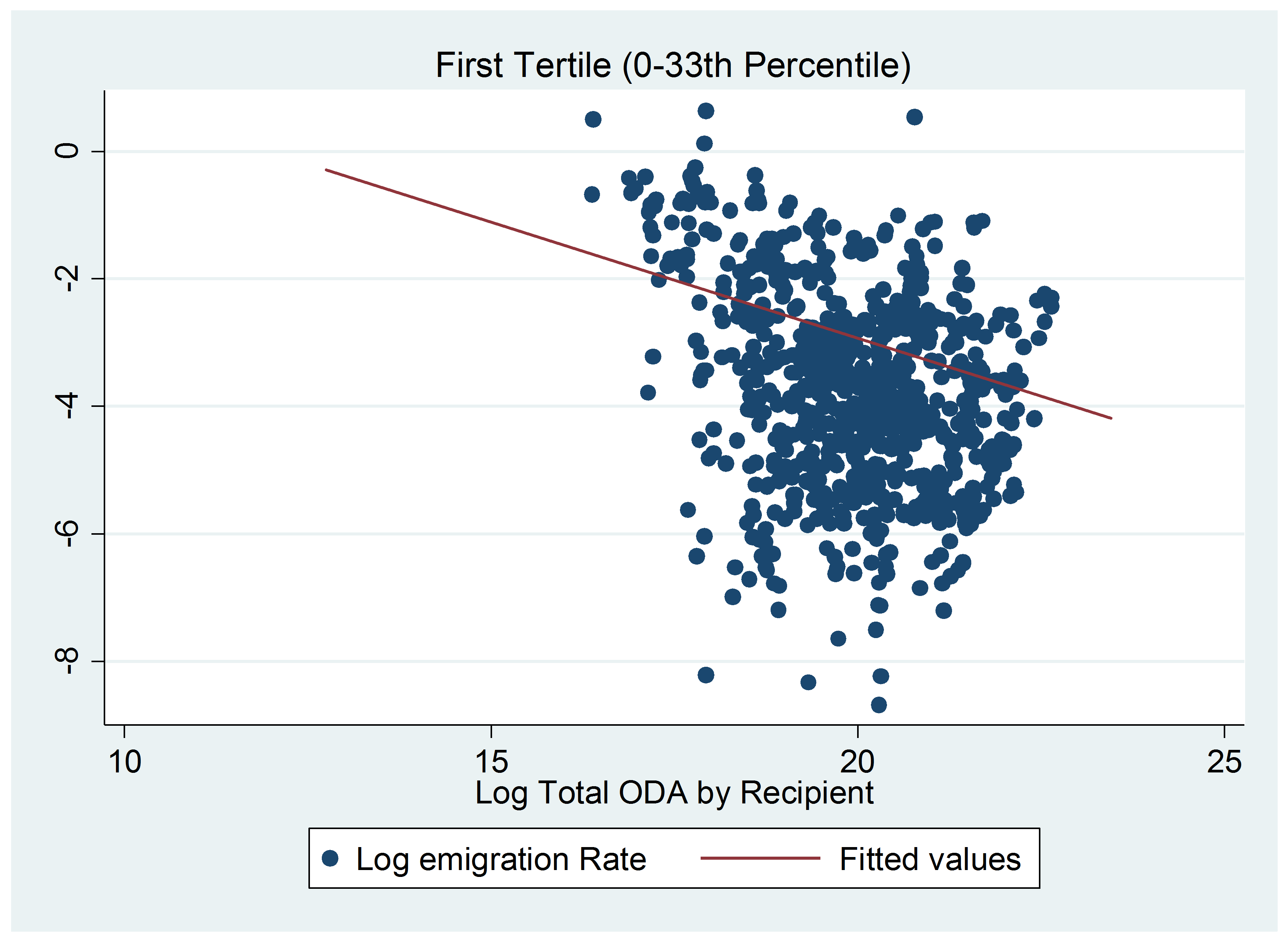 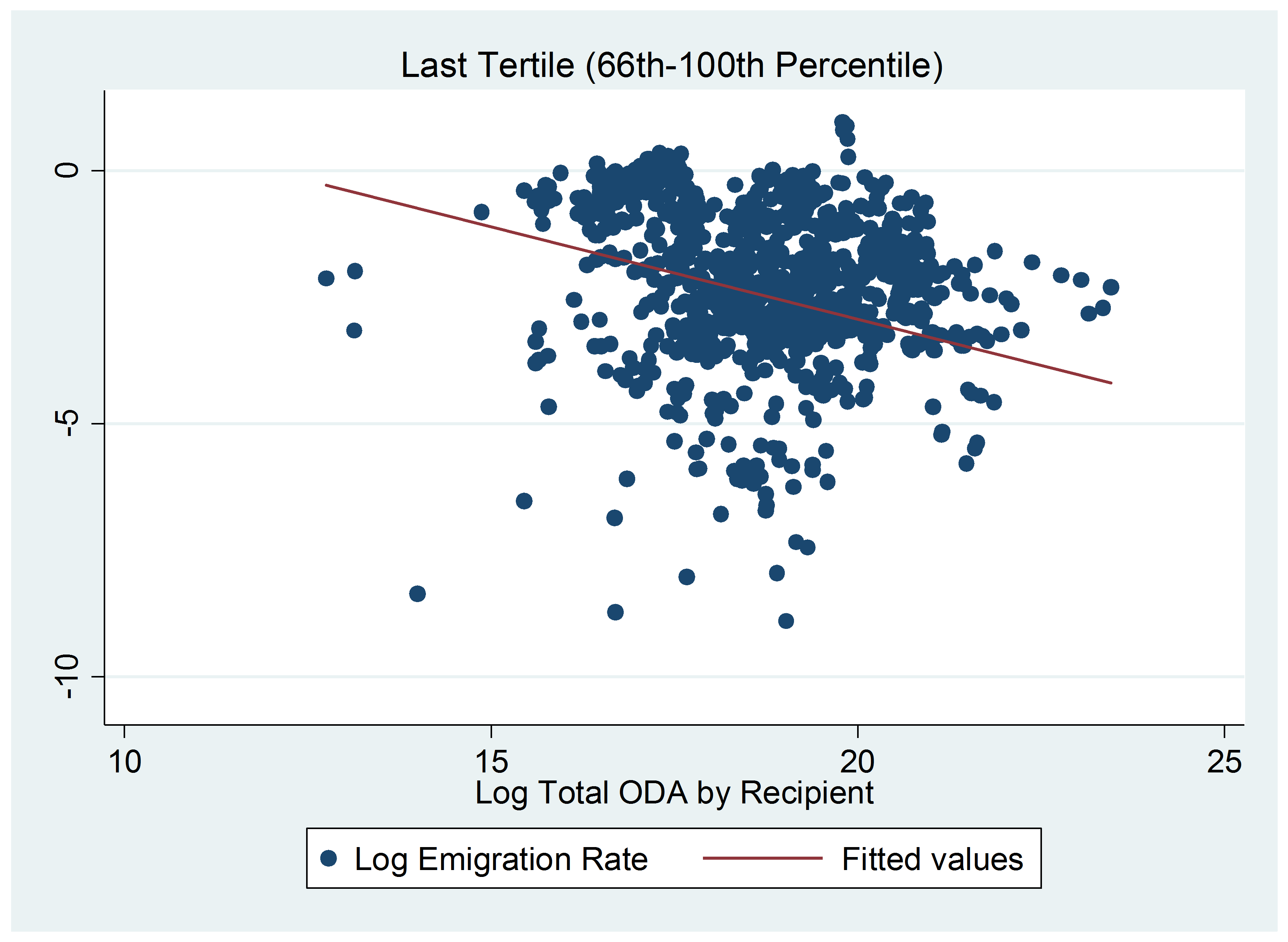 Note: —
The EUI, RSCAS and MPC are not responsible for the opinion expressed by the author(s). Furthermore, the views expressed in this publication cannot in any circumstances be regarded as the official position of the European Union.
|  EU foreign aid MEDAM Project