Out there on your own: integration without family

When the number of asylum seekers arriving in Europe surged in 2015 and 2016, it was only a matter of time before the issue of family reunification would arise. After all, many asylum seekers were married men, hoping to arrange for their spouse and children to join them. European countries that were still struggling to accommodate the extraordinary numbers of asylum seekers faced a dilemma: if newly recognised refugees were given the same right to family reunification as before, this would mean even higher numbers; if they were not given this right, families’ precarious situations would be prolonged and the prospects for integration might be undermined.

How damaging is separation from the family for integration?
While migration researchers could estimate how many more migrants would arrive due to family reunification, it became apparent that next to nothing was known about the role of family reunification for integration. The available studies were based on a small number of interviews and highlighted the stress endured by migrants who could not yet reunite with their families (see here for an example). However, no research was available on how the absence of the family might affect migrants’ integration outcomes in the long term, if at all. Precisely this question had in fact been identified as a gap in knowledge.

The question of how family reunification affects integration outcomes has, however, remained unresolved. This does not mean that the question has become irrelevant in the meanwhile – family migration is the largest channel of migration to OECD countries, accounting for at least 40% of inflows in 2017 (see Figure 1). The question, therefore, goes beyond refugees: what is the effect of rapid family reunification on migrants’ integration? Is it positive, possibly because spouses support each other in their efforts to settle in the host country? Or is it negative, possibly because migrants whose spouse joins them become more inward-looking and engage less with the host society? 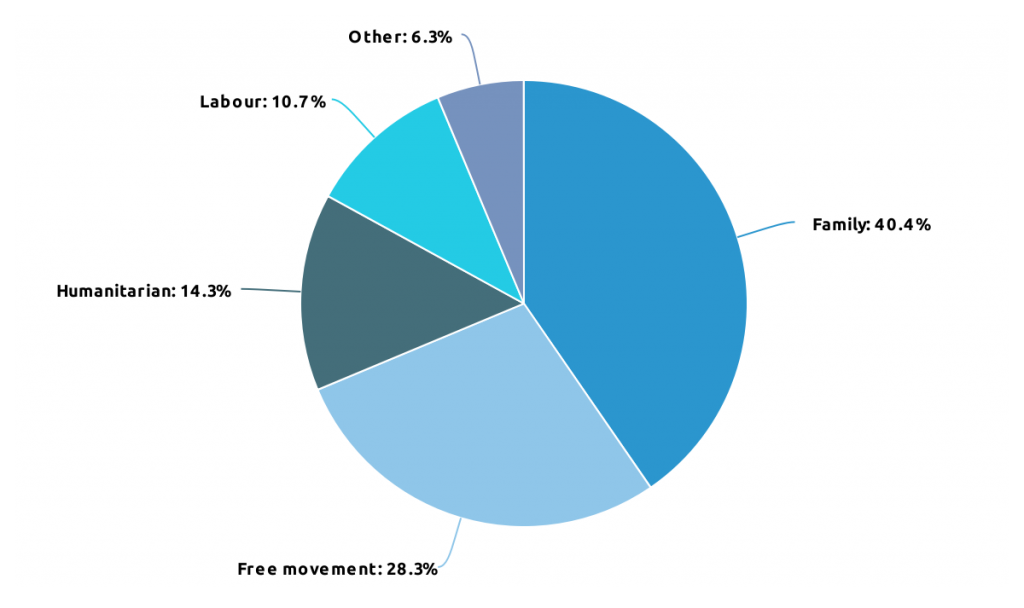 In a new Working Paper published by the Migration Policy Centre at the EUI, I examine the role of family reunification for the integration outcomes of migrants, with a focus on the role of spouses. My paper uses a large data set from the United States that allows the identification of migrants who live without their spouse as well as migrant couples who were reunited after a number of years. My analysis benefits from the large sample size of these data, which include all kinds of migrants. The data also enable me to trace effects in the long term, which is not yet possible for refugees who arrived in recent years.

Uncertainty changes migrants’ behaviour
The empirical findings of my analysis highlight that migrants’ uncertainty about how long they will stay can shape integration outcomes. This uncertainty is likely to be very high when they are not (yet) reunited with their spouse. In this situation, my results suggest that migrants focus on the short term by working more: migrants whose spouse is absent are 1.5 times as likely to be employed as similar migrants whose spouse is present, and their weekly hours of work are 3% higher. At the same time, their long-term wage growth suffers: I find that each year of delay in the reunification with the spouse is linked to a wage decrease by around 2%, including wages long after arrival. The reason could be that migrants whose spouse is absent neglect investing in human capital and other factors that pay off in the longer term, such as acquiring additional qualifications, developing professional networks, and reaching a high proficiency in the host-country language.

The stronger employment orientation of migrants whose spouse is absent is driven mainly by the results for women, both in terms of the probability of employment and in terms of working hours. This could mean that women whose spouse is absent shift their priorities more strongly than men towards earning work income in the short term. Alternatively, sheer necessity to sustain oneself or support the family abroad might lead women to work who would otherwise – if their spouse was present – often work relatively little.

The negative effect on wages is rather driven by the results for men. While wages are often considered a good measure of long-term integration, it is not clear a priori whether delays in reunification cause lower wages or lower wages cause delays. When empirical techniques are used to disentangle these two possibilities, it appears to be primarily delays causing lower wages.

While analyses specifically for refugees are not feasible in this context, effects from absence of the spouse likely differ somewhat for refugees. The first effect, a stronger employment orientation while the spouse is absent, might be less pronounced for refugees: their labour market integration has often been found to be slow and difficult, which limits their ability to raise their employment orientation. The other effect, lower wage growth, might be more pronounced for refugees: the uncertainty of their situation is especially high compared with other migrants. As their spouse may be in danger or require their support in another country, refugees might feel compelled to leave the destination country again after a short period of time. In addition, recent refugees to Europe often received an initial residence status for a comparatively short duration.