Is the Global Compact on Refugees having an impact? Leaders from around the globe gather to take stock at the High-Level Officials Meeting.

In mid-December 2021, I joined hundreds of leaders from around the globe for a virtual two-day gathering to assess progress on the implementation of the Global Compact on Refugees (GCR). Leaders represented UN member states, non-UN member states, city governments, international organizations, the private sector, academia, sports organizations, and refugee-led organizations. The agenda was largely dedicated to updates from delegations on the status of their pledges and charting what needs to be done before the next Global Refugee Forum scheduled for 2023.

If you’re new to following the GCR, here’s some background information

The progress quantified in UNHCR’s Indicator Report was countered by several discouraging trends.

In preparation for the HLOM, UNHCR released their Indicator Report (read it or watch a summary) and delved into all of its themes with preparatory roundtables on funding, partnerships, solutions, and self-reliance. (If you have time and don’t want to watch all 14 of these, these three panels were the most interesting: Refugee Inclusion through Data, Innovative Financing, and Peaceful Coexistence).

The Indicator Report quantified international progress on each of the GCR’s four objectives.  There were some positives, but largely countered by some significant negative trends. 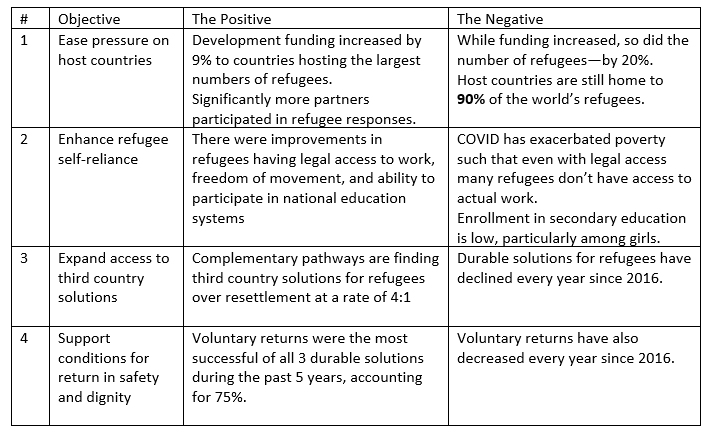 Three key policy themes emerged around responsibility-sharing, solutions, and self-reliance, each of which could impact what we do and how we do it.

Policy theme #1: Everyone feels like they’re doing a lot. And everyone says that we need more ‘responsibility sharing’

Over two days, close to 90 individual delegations shared proudly and volubly the many ways they have supported, are supporting, and will continue to support refugees. Along the way, nearly all of the speakers called for the need for more ‘responsibility-sharing.’

Responsibility-sharing, mentioned 21 different times in the GCR itself, is something that everyone agrees with, at least conceptually. But the GCR did not define what it means, nor have senior leaders done so since then, despite saying we need more of it. The meeting demonstrated that leaving responsibility-sharing as a value and not a methodology means that everyone is going to continue to feel, ‘Hey, we’re doing all of these things, and all of you are not pulling your weight.’

Resettlement quotas and financial contributions are pillars of the GCR but the document itself is non-binding meaning that they are unlikely to be viable anytime soon. That said, nothing prevents the modeling of options for quotas or creating scorecards and methodology to quantitatively assess what sharing responsibility actually means: how much is there to share, who has the most, who has the least? We have to benchmark –with actual numbers or at least percentages what responsibility-sharing would look like if we want to make progress on it.

Policy theme #2: There may be three historic durable solutions, but what officials are investing in is complementary pathways and development.

No one is explicitly calling to do away with the three longstanding durable solutions of repatriation, local integration, and third country resettlement. However, most discussion was not actually focused on these three solutions but instead on complementary pathways and development.

There are strong merits to both of these; and there are also strong critiques. These could be discussed at length, but what’s worth highlighting from the HLOM is the sheer focus and reliance on these two interventions. Its arguable that we de facto view them both as solutions, if not more important than the existing three durable solutions. If this is the case, we should be intentional, explicit, and critical about that.

Policy theme #3: We’re talking about self-reliance but in a way that doesn’t promote refugees’ strength, dignity, and skills.

Possibly the most moving part of the entire gathering was this video about the economic mobility project. It featured Bahati Hategekimana, a former refugee who found a nursing job in a supported-care facility and was able to move to and start a new life in Novia Scotia, Canada. People will praise her story as the epitome of the ‘self-reliance’ that the GCR seeks to increase. And maybe they should; it was captivating and inspiring. But to do so without noting some very important aspects of her story would be detrimental.

Second to responsibility-sharing, delegations highlighted all the work they are doing to increase refugees’ self-reliance. But while we state this as a goal, it’s not evidence that it is actually changing our approach to services and solutions as it should. Here’s what Hategekimana actually talked about in the video: she talked about her dreams, her goals, and how she worked hard through school; she talked about how dignifying the job interview was because no one mentioned she was a refugee. No one told her they were trying to help her increase herself self-reliance. Instead, they asked her about her training, her skills, and how she could contribute.

We should be critical in evaluating if the words we’re saying align with the actions we want to see. For example, simply by continuing to say we want to increase refugees’ self-reliance can be problematic. It implies that we believe that they need to improve something about themselves, which further implies that they are in the situation they are in because of something they personally did.

If we want to see more stories like Hatekgekimana, let’s talk more about creating opportunities and providing safety and stability for refugees to leverage their strengths, creativity, and initiative.

So, what’s next? Here’s possibly the most important thing that needs to be done before the next Global Refugee Forum:

The GCR’s ability to galvanize such widespread commitment is largely what makes it so remarkable. These commitments are demonstrated in the sheer numbers participating in these gatherings and through delegations’ pledges. The HOLM was a ‘mid-term review’ of these and the next big check will come in 2023 at the next Global Refugee Forum where the focus will largely be similar to what it is now: announcing new pledges and sharing progress of past ones.

To best leverage these pledges, more than any indicator or policy change, possibly the most important thing we can do is to implement the recommendation of InterAction and NGOs: update the public pledging dashboard.

Simple as it may be, if we make the default fields for new pledges to be specific, quantifiable, and timebound, we’ll inherently make pledges more impactful, actionable, and trackable. And, who knows, maybe we won’t even need these gatherings to discuss them.

Stephanie Acker is a Policy Leader Fellow at the European University Institute’s School of Transnational Governance. Her work focuses on policy and practice solutions to close the refugee resettlement gap. In this blogpost she draws from her professional experience to advocate innovative solutions to the housing needs of refugees. This blogpost is part of our forum on the transnational governance of migration. The views and opinions expressed in these posts are the author’s own.