The long-term closure of schools due to COVID-19: Are we set for a less tolerant future?

While much of the existing discussion of the effects of school closures due to COVID-19 has been focused on impacts on educational outcomes, student performance and future earnings, this blog explores a different type of potential impact of long-term school closure, namely, an impact on young people’s values and attitudes. One of the most consistent findings in empirical research is that higher educated individuals are more tolerant of ethnic and other minorities than those with lower education. In line with this, educators, political leaders as well as scholars have long viewed education as the principal channel for the transmission of social and cultural values such as democracy, social acceptance and equality.

In an unprecedented policy response to the COVID-19 pandemic, governments across the world have, almost universally, closed schools and universities (Figure 1). Will long-term school closure due to COVID-19, and the associated moves to online teaching and homeschooling, have lasting consequences for young people’s values and attitudes, and consequently for societies in general? 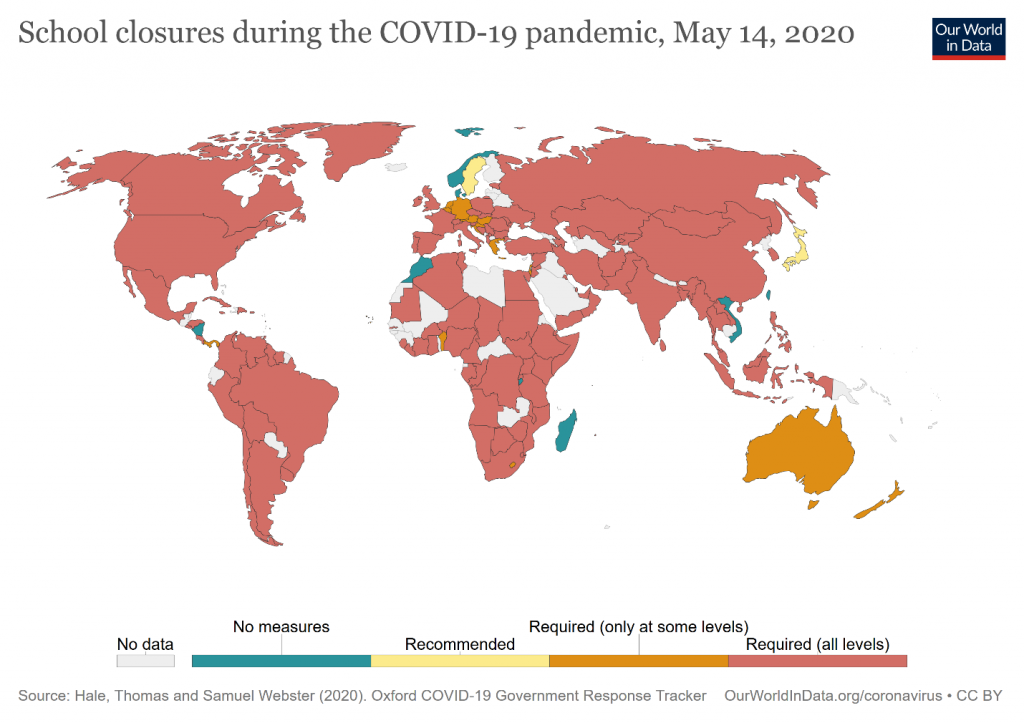 Education and attitudes to immigration

Research has consistently found that tolerance rises with one’s educational level. Individuals with higher levels of education often have more egalitarian social norms, are more in favor of immigration and immigrants and of minorities´ rights. Several recent studies find that even an additional year of schooling decreases anti-immigration attitudes later in life. On the other hand, research has also established that individual attitudes to immigration and immigrants in adulthood prove remarkably stable over time, which supports theories that emphasize their acquisition during formative years.

What does existing research tell us about why education increases tolerance? Social psychological theories argue that higher educated individuals become more tolerant of immigrants and minorities because during education they acquire higher cognitive capacity and open-mindedness to learn about the world that surrounds them. Because of this, the research suggests that they do not fear the ‘unknown’ (such as people with different looks or lifestyles) to the same degree as those that have not had the same access to the development of these cognitive skills. Individuals that have acquired higher levels of education usually display greater competence in their social environment and a higher capacity to influence the forces that affect their lives. In turn, for those that have benefitted from access to higher levels of education, this fosters their higher self-esteem and personal security, connected to lower feelings of threat from those who deviate from conventional societal norms. Along similar lines, group conflict theories maintain that individuals with higher levels of education form part of a socio-economic class with much greater financial security. This is why they are less likely to directly compete with (often lower skilled) immigrants and, in consequence, less likely to perceive them as a threat.

A Covid-19 effect on young people’s values and tolerance?

Therefore, with less time spent in education due to Covid-19, the question arises if the present-day´s school closures will affect young people´s future attitudes? The answer to this question is not entirely clear. While, for example, the correlation between higher levels of education and more favorable attitudes to immigration is a consistent finding in existing research, the available studies also show that the relationship between education and tolerance is not as straightforward as it is sometimes suggested and the strength of the relationship is highly connected to societal context. For instance, it has been shown that education contributes to more tolerant views only in countries with a long-lasting democratic tradition, high GDP per capita, low ethnic but high religious heterogeneity and a high percentage of university educated population.

Despite their different theoretical grounds and starting points, both social psychological theories and group conflict theories share the idea that it is the process of acquiring an education that reduces anti-immigrant sentiment. Yet, recent evidence shows that young people, in fact, change attitudes to immigration very little as they pass through education. For this reason, the differences in immigration attitudes between higher and lower educated individuals appear not to be the effect of education per se, but what we observe is rather a process of self-selection into education. Simply put, the same individuals that are pro-immigration are also those who acquire higher levels of education.

Recent sociological research supports the view that acquiring education and learning per se has much less effect on individual values and attitudes than is commonly assumed. Rather than a socializing agent, education acts as a form of social stratification especially due to differences in family environments and in the time parents dedicate to their children. These are the factors that really infringe on the equality of opportunity and consequently educational attainment of children, but also on values and attitudes in general. Therefore, those who hold certain values and attitudes, partly obtained from their family environment, are also those who obtain higher education.

Based on this more recent research of the link between education and tolerance, the reduction in time spent at school because of Covid19 might not have a large and general impact on young people´s future attitudes. COVID-19 long-term school closures might, however, deepen the divide between future academic achievements of children from different social classes, as those from middle and lower classes might be disproportionately more affected by the discontinuation of schooling. The loss in future educational attainment of the worse-off children connected to economic insecurities may translate into highly negative immigration attitudes, as they might feel more defensive, and thus intolerant, towards „outgroups“ perceived as competing with them. This will not be due to less time spent in education per se, but rather because of the aggravated economic situation connected to lower educational attainment as people with economic insecurities show more negative attitudes to outsiders.