“Narratives” on, about, for or against international migration are increasingly cited by a wide range of organisations, including national governments, international organisations and NGOs, as one of the most powerful factors in migration policymaking today. For example, the UN Office of the High Commissioner for Human Rights claimed that narratives ‘play a fundamental role in guaranteeing equality and the human rights of migrants’ but that inaccurate and nefarious migration narratives are on the rise, using ‘migrants as scapegoats for deep-rooted societal problems and fears, often for political or financial gain.’ Similar claims are regularly made across a range of organisations working on migration.

Yet, whereas narratives hold a significant place in the imagination of migration policymakers, they—and their causes and effects—are often conceptualised on little more than assumptions, ironically, by forming narratives such as the UN example cited above. To look more deeply into the issue, in a recently published report entitled Immigration Narratives in the Euro-Mediterranean: What people believe and why for the International Centre for Migration Policy Development, I review recent scholarly advances to specify what narratives are, explain variation in their popularity, and outline evidence on their effects.

In terms of meaning, according to almost all definitions narratives are selective depictions of reality across at least two points in time that include one or more causal claims. Furthermore, most studies claim that: (1) the formation and selection of narratives is necessary, inescapable and universal to all humans as a way to make sense of near infinitely complex reality—in short, we all produce and use narratives to orient our way through the world; (2) narratives are generalisable and can be applied to multiple situations, as opposed to specific stories; (3) narratives are also distinct from other, related concepts such as frames and discourses; (4) narratives contain implicit or explicit normative claims or “lessons” and have an evolutionary origin as a way to pass on knowledge, making them highly memorable; (5) the potential number of narratives is essentially limitless but only a small number gain popularity. Working with narratives is therefore a vital part of effective strategic communication, in migration and elsewhere.

Furthermore, academic findings show the popularity of narratives is determined by a combination of large number of factors that can roughly be grouped into three main categories:

Together, these factors are shown in Figure 1. Each of these groups of factors found in the literature provide strategic lessons for how to use and make sense of narratives, respectively: (1) competing narratives may gain popularity at the same time; (2) facts do matter in determining the popularity of narratives, contrary to some claims; and (3) effective communication will work with rather than against its audience’s deep-seated predispositions. 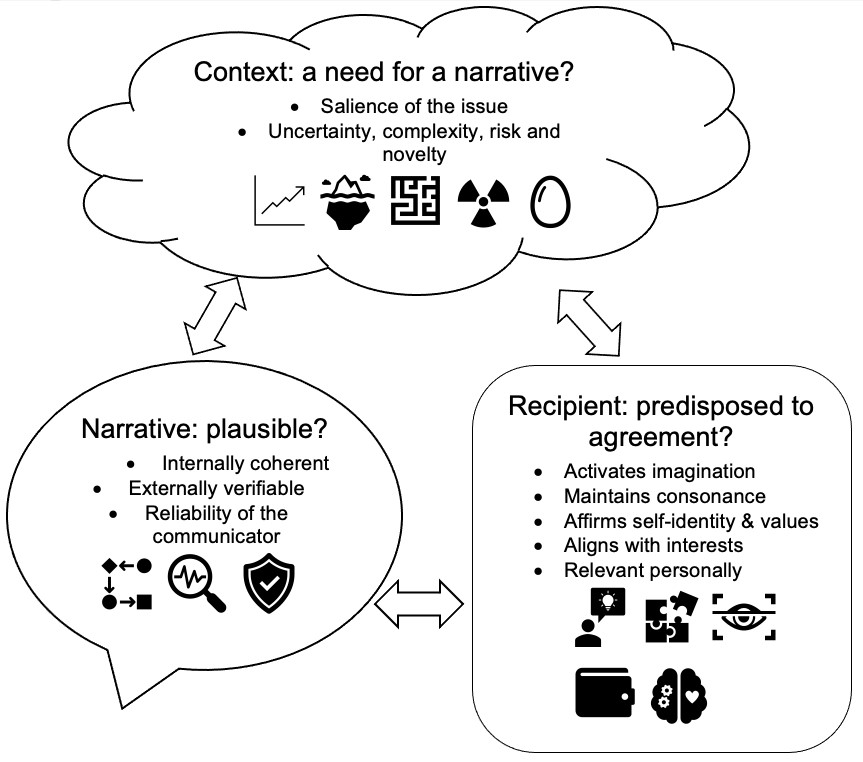 In terms of effects, the role that narratives play in forming public attitudes and behaviours are less explored than their effects on organisational and policy outcomes. Scholars have increasingly turned to narratives when explaining policy outcomes as a part of a broader acceptance that neither “facts” nor “interests” can sufficiently explain decisions by policymakers, leading to theoretical contributions such as the Narrative Policy Framework. Researchers have particularly considered how a purported “securitisation” narrative amongst policymakers that focuses on the threatening aspects of migration—arguably fuelled by negative attitudes and opportunistic actors—led to the adoption of stricter border policies, the use of detention centres, a focus on the supposed criminal aspects of migration and so on. However, it has also been argued that such a “securitisation” understanding of trends in migration policymaking is itself a selective narrative, with only mixed supporting evidence.

Several other well-known migration narratives have been argued to have had policy implications, such as those relating to public safety, well-being, crime, development, or terrorism, while international organisations have been argued to have converged upon a depoliticised, deterministic “international migration narrative”. Generally, less research has considered how positive—or at least normatively relatively neutral—migration narratives have affected policy such as those relating to cultural richness, economic contribution, human freedom, and humanitarian and developmental effects. Moreover, relatively little quantitative research has considered how narratives about migration affect immigration policy preferences, or vice versa. One potential to reverse this trend—which I make an initial attempt to do in the report—has been presented by the most recent 2017-2020 wave of the World Values Survey across 47 countries, which asks about agreement with the key proposed effect of migration across ten migration narratives relating to jobs, culture, humanitarianism, asylum, crime, terrorism, unemployment, and social conflict.

Overall, narratives are a key part of humanity’s attempts to understand reality. As such, policymakers and communicators must prioritise the effective use of narratives in their work to be understood and believed. As demand for understanding an issue increases, multiple, competing narratives may simultaneously become popular meaning that the visibility of a narrative makes a poor gauge of overall public policy preferences or general attitudes to immigration. A narrative’s popularity is partially reliant on its plausibility: both in terms of being internally theoretically logical and supported externally with evidence meaning that facts—when combined with compelling logic—do matter. However, other factors matter too: communicators and policymakers must construct their narratives and make their points around the recipients’ own pre-existing cognitive pillars rather than challenge them or try to recreate them from scratch. Individuals are likely to agree with most plausible positive and negative narratives on migration simultaneously. These findings have more recently been expanded on and published as a scientific review, entitled Narratives: a review of concepts, determinants, effects, and uses in migration research, in Comparative Migration Studies. Future research should robustly test the effects of migration narratives on political attitudes, behaviour, and policies (including emigration preferences and behaviour), particularly via the use of experimental evidence.