The demographic composition of most countries has changed dramatically in the last decades. The questions of how different people with different backgrounds can peacefully interact in the modern and more globalized world, and how their societies may prosper, are among the most important challenges of recent years. There has been a growing interest among social scientists and policymakers in studying and uncovering the role that different types of diversity play in shaping social, political and economic outcomes. Exploring this issue is extremely important and relevant to a range of different public policies, including policies relating to immigration and integration.

How can we, and how should we, measure ethnic diversity? These are hard and highly contested questions. A fundamental problem is that there is no widely accepted and uniform definition of “ethnicity”. Group identities are complex and mostly socially constructed, which means that quantifying and measuring them is inherently problematic. There can be multiple ways of specifying different “ethnic groups” in a country, with no one obvious “best” way of doing so. Questions related to the definition of diversity become even harder in comparative research that involves multiple countries, each of which often has its own concept of ethnicity.

Why change over time matters

Definitional issues aside, I argue that a major problem with a large part of existing social science research on the effects of ethnic diversity is that diversity is treated as an exogeneous variable that does not vary over time. A recent study by researchers at Princeton University and the University of Oxford shows that although initially threatened by change, people adapt to societal diversity over time. Research that treats ethnic diversity as time-invariant has made limited progress in learning about its long-term effects.

For this reason, I have developed a new Historical Index of Ethnic Fractionalization (HIEF) dataset. It contains data on ethnic fractionalization in 162 countries for each year in the period 1945 – 2013 (see Figure 2). Fractionalization (sometimes also referred to as fragmentation) indices measure diversity as a steadily increasing function of the number of groups in a country. They are based on the probability that two randomly drawn individuals from a country belong to two different groups. Theoretically, fractionalization indices range from 0 (when all individuals are members of the same group) to 1 (when each individual belongs to his or her own group). 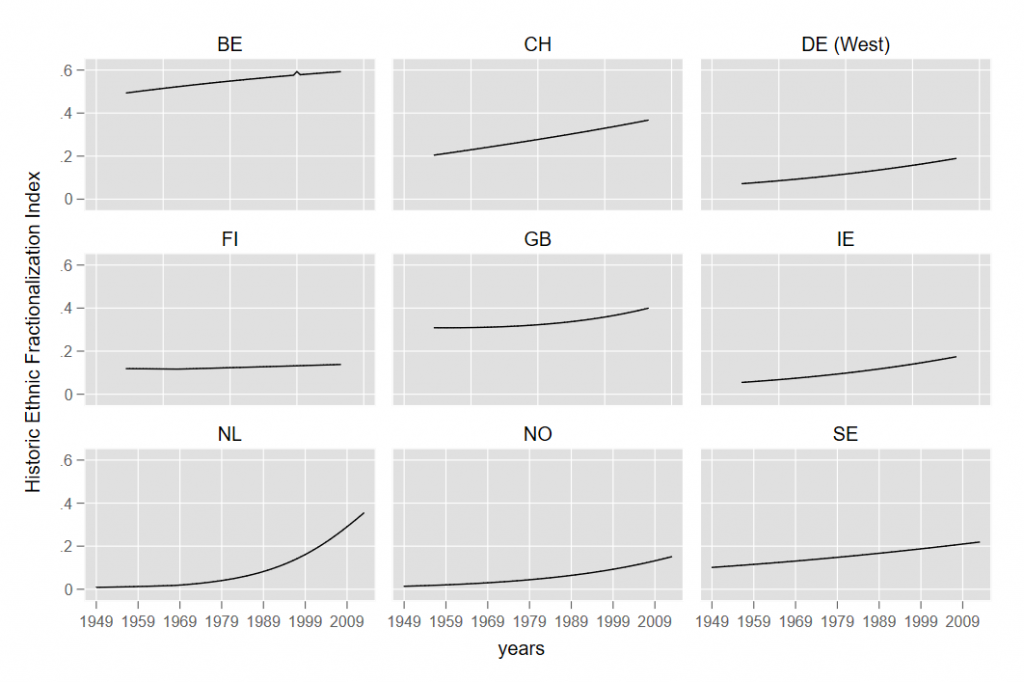 Explorations of the new dataset illustrate the reasons why it is important to take account of historical changes in ethnic diversity within countries. Figure 1 shows the change of ethnic fractionalization over time in a sample of Western European countries. We can observe, for example, that Great Britain and the Netherlands had a similar level of ethnic fractionalization in 2013, but since 1949 diversity in the Netherlands has grown at a much faster pace than in Great Britain. In other words, Dutch society had to adapt to diversity more rapidly than the British. In contrast, we also see that Finland’s ethnic fractionalization was generally low in 2013, and that it has stayed quite stable over the last 50 years. 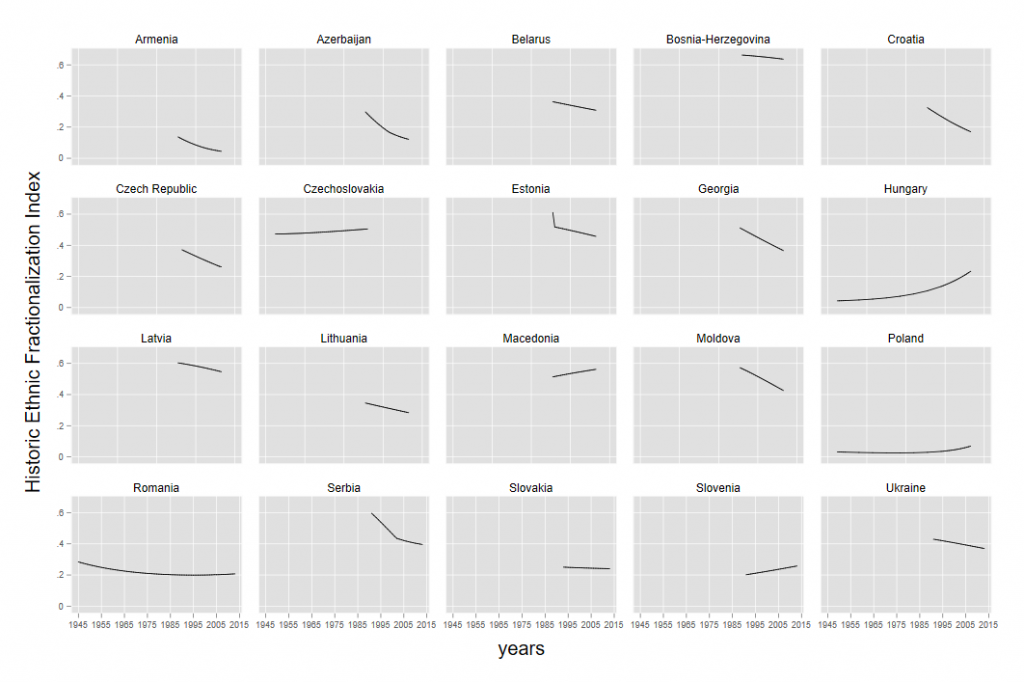 On the other hand, as shown in Figure 2, many Central and East European countries are much more ethnically homogenous than they used to be. Moreover, they became homogeneous in a short period of time. For instance, while former Czechoslovakia used to be a highly ethnically heterogeneous country, its successor states, Czechia and Slovakia, are much more homogeneous. Apart from separations of what used to be ethnically heterogeneous countries such as Czechoslovakia, Yugoslavia or the Soviet Union, there are a number of reasons why one can observe changes towards more homogeneity in Central and Eastern Europe. Firstly, after the collapse of communism many workers left their respective countries in search of new economic opportunities. Secondly, in many post-Soviet countries Russian minorities begin to feel unwelcomed, resulting in return migration.