Taxation with representation? How do resident citizens feel about enfranchisement of non-citizen residents?

This blog presents fresh evidence from Switzerland about the factors that can influence Swiss citizens’ attitudes to extending voting rights to non-citizen residents in Switzerland. While European countries have experienced significant political changes as a result of migration, the political inclusion of foreigners remains a controversial frontier of institutional change. An important, yet often overlooked issue within this debate is voting rights for non-citizen residents giving them the potential to directly shape the political decisions that affect their lives.

From an historical perspective, voting rights are an area of relative weakness for integration policy. Only a handful of countries grant non-citizen residents the right to vote in national elections, and while voting rights exist in local elections in more than 60 democracies (Toral, 2015), they are often restricted or limited in some ways. Moreover, in spite of the sizable scientific literature on franchise extension and attitudes to immigration, surprisingly little is known about what drives public opinion about resident non-citizens’ political inclusion. Until recently, cross-country evidence merely highlighted the importance of policy constraints and the negative relationship between the share of resident non-citizens in the total population and the likelihood of their enfranchisement (Earnest, 2015; Kayran and Erdilmen, 2020).

In the last two years, however, new research in economics and political science has provided fresh evidence into factors that can shape attitudes to voting rights for resident non-citizens. Using data from municipal referenda about resident non-citizens enfranchisement in Switzerland, three studies (Stutzer et Slotwinski, 2020; Koukal et al., 2021; and Gonnot, 2021) have identified empirically some of the drivers behind attitudes towards the extension of voting rights to resident non-citizens. These drivers can be conceptualized in terms of power dilution, cultural distance, and economic interest.

All three studies show that Swiss citizens are less inclined to favour enfranchisement in municipalities where the share of resident non-citizens is larger, suggesting that resident citizens’ reluctance to share power increases with the amount of political influence some fear they might give up. Concerns about power dilution are found to be particularly salient in smaller municipalities, where franchise extension decreases the relative weight of an individual vote and resident non-citizens votes could weigh more heavily on political outcomes. In their analysis of 13 German and French-speaking cantons, Koukal et al.  show that the share of resident non-citizens exhibits a heterogenous effect with respect to the strength of representative democracy: In municipalities with a town meeting (as opposed to a local parliament), concerns about power dilution leads to greater opposition to franchise extension. 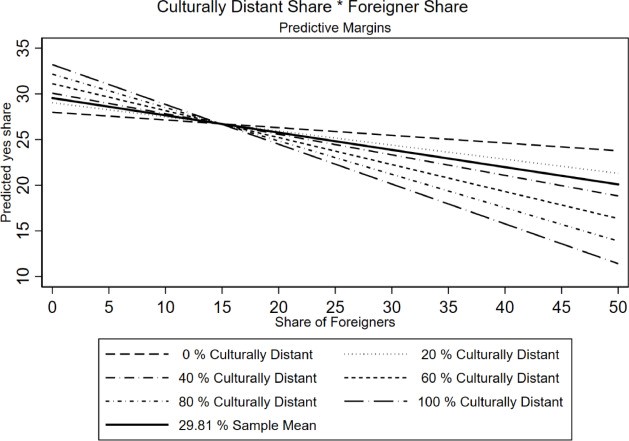 Evidence on whether resident citizens’ economic concerns and socio-economic status influence their views towards resident non-citizen enfranchisement is less conclusive. While Stutzer and Slotwinski find that the fraction of high-income residents and the rate of unemployment are not systematically related to the share of ‘yes’ votes in local referenda, Koukal and her co-authors argue that unemployment rate among Swiss residents is a significant predictor of opposition towards the enfranchisement of resident non-citizens.

Against this backdrop, my own research provides additional evidence of the influence of economic and fiscal concerns on attitudes towards resident non-citizens’ voting rights. Building on a theoretical model of preferences for redistribution based on wealth and cultural beliefs, my theory predicts that disadvantaged resident citizens could support non-resident citizens voting rights in order to form a coalition with resident non-citizens whose economic views are congruent with their own, therefore strengthening their political clout. I test this theory on nearly 700 municipalities in six different Swiss cantons by looking at how the share of votes in favour of extending the franchise relates to the share of Swiss citizens receiving means-tested cash transfers, which are largely financed by the municipal budget in Switzerland.

I find that the share of ‘yes’ votes is greater in municipalities hosting a higher share of Swiss citizens entitled to means-tested cash transfers, and that this effect increases where the foreigner-to-citizen poverty gap is larger and where resident non-citizens originate from countries with more liberal beliefs about redistribution. In cantons where the poverty rate of non-Swiss residents is on average 30% higher than that of natives, my findings suggest that the convergence of economic interests may create political opportunities from enfranchising resident non-citizens for citizens receiving welfare benefits. Perhaps more importantly, this challenges the usual perception that citizens with lower socio-economic status are consistently more hostile towards immigrants. Instead, in some contexts, such individuals may support resident non-citizens’ political inclusion when they can benefit economically. This resonates with a recent evidence suggesting that low-income citizens may take advantage of the enfranchisement of resident non-citizens, who have a tendency to vote for left parties and has also been linked with increased spending on social and family expenditures (Vernby, 2013).

Given the limited democratic legitimacy of decisions excluding non-citizen taxpayers and the integrative effects of political empowerment, further investigation is necessary to understand the conditions under which political participation rights can be transferred to non-citizens residents. On the policy side, support from progressive voices in favour of extending the right to vote to resident non-citizens can be seen in the USA as well as in Europe. In Europe, however, political will is still lacking and overshadowed by vested electoral interests, where immigration issues often serve to mobilize voters against resident non-citizens and little or no attention is paid to the symbolic and substantive consequences of political integration.