We are in a populist moment. Populists are making startling gains in support and access to power across the West. The election of Donald Trump and the vote for Brexit in 2016 signalled the arrival of this new reality. The success of Trump and his European compatriots is particularly striking because they bucked the trend: while Europe has long had populist radical-right parties, they were largely relegated to the margins and kept far from government. Today, one in four Europeans vote for a populist party and more than 170 million Europeans are governed by a cabinet that has a populist member.

It is almost becoming rote to note and lament this trend. If it weren’t such a serious problem, it would be tempting to turn our attention to other pressing matters. But the reality is that today’s populism represents an existential threat to our liberal democracy. This is because, in most cases, populism is underpinned by a virulent ethnic nationalism.

We know a lot about populism. It is among the most studied political phenomenon. The huge body of research on populism tends to see its rise as a response to large-scale shifts in our economy and society. But this is only half the picture. There are other important factors at play, namely the content of today’s populism.

What we are missing: ethnic nationalism

If we want to really understand what is going on today, we need to pay close attention to what populists are saying, how they are saying it and why their messages are reverberating with the public.

One of the best ways to do this is to carefully look at what archetypal examples of today’s populists are saying on a regular basis. Unpacking the messages of “successful” populists – like Donald Trump – allows us to understand how and why they win elections.

This is what I did with my colleague Eric Woods in a newly published article. We read all 5,515 of Donald Trump’s tweets during his presidential run in 2016. Our analysis confirmed our suspicions: Donald Trump is a populist, but he is also an ethnic nationalist.

It is not terribly surprising to call Trump an ethnic nationalist. He regularly plays identity politics, stoking racial and ethnic divisions. His calls to send American congresswomen of colour back to where they came from, or his defence of the “very fine people” at the Unite the Right rally in Charlottesville come to mind here.

What is more surprising is that a close reading of all of Trump’s tweets over the 2016 campaign shows that these are not mere utterances or occasional slips: ethnic nationalism is the foundation of Donald Trump’s political strategy. It was by far the most common theme in his 2016 Twitter campaign (see Figure one). 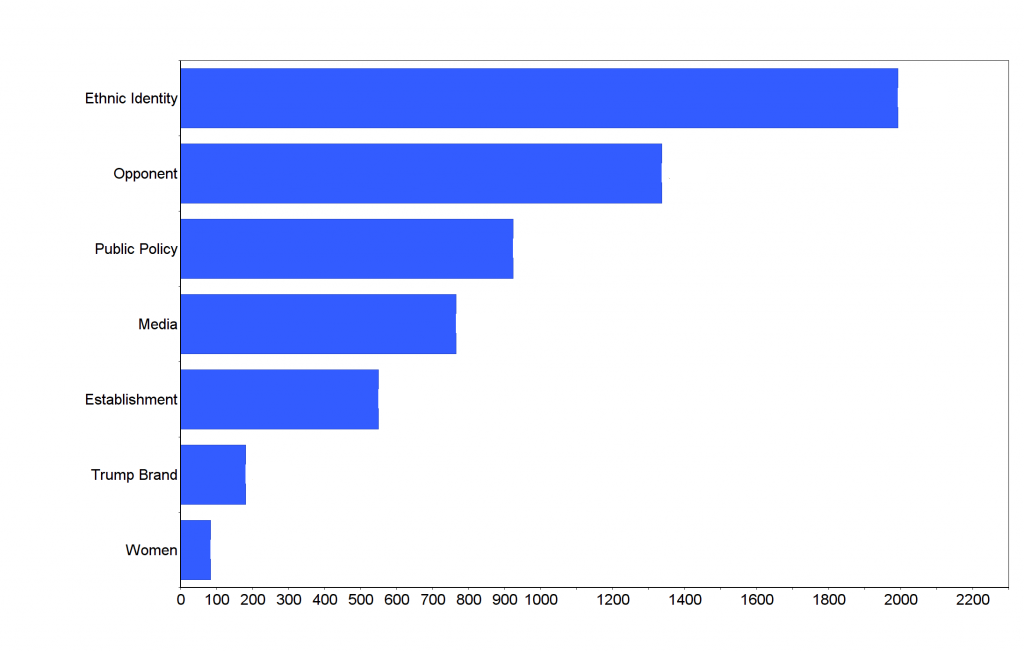 Figure One: Overview of Topics in Donald Trump’s Tweets During 2016 Primary and Presidential Campaign

Throughout his campaign, Trump presented himself as the protector of the majority group in America – his so-called silent majority – against the threat of outsiders. He followed a long-used practice of identifying those that do not fit the mould of “true” Americans. His main targets were Mexican migrants, Muslims and political elites, presenting these groups as threats to the survival and interests of the white majority. Indeed, his entire campaign was set up as an argument that America needed to rid itself of these groups to return to glory – to make America great again. The centrality of this idea to his campaign strategy is clear when looking at his favoured topics: about 2000 tweets contained overt ethno-nationalist messages, whereas he tweeted about core policy issues like healthcare, taxes and the Supreme Court only 59, 32 and 12 times, respectively.

Trump did regularly rail against the elites and the establishment (over 500 times on Twitter). He also liked to attack people, something he continued throughout his presidency. Interestingly, though, he often combined populist and ethnic nationalist themes. He would say that the establishment needed to be overthrown to return power to the majority, and that elites were soft on threats like illegal immigration and terrorism. In short: Trump’s populism was underpinned by ethnic nationalism. His tweets show that his “real” America is white, European and Christian.

It is largely this grouping of Americans that Trump targeted in 2016 – and their support was critical to his electoral victory. Approximately 70 percent of the votes cast in the election were by white Americans: 57 percent of these voters sided with Trump (20 points higher than their support for Hillary Clinton), with Trump winning both white men (62%) and white women (52%).

Why now, though? The three key drivers of the populist moment

Careful analysis of what populists are saying can help us see that they are ethnic nationalists. But this still leaves us with important questions – particularly why they are winning today. Here is where the focus on big shifts in our economy and society can help. The accepted orthodoxy is that there are three factors that explain why we are seeing support for populists rising across the West.

The first factor is economic inequality. Major shifts in the economy, the changing nature of work and rising inequality create anxiety among the middle and working class. This anxiety leads voters toward populist and nationalist ideas. These disaffected people that feel “left behind” by the progress of globalization are channelling their resentment toward “elites” and “foreigners” as part of a larger cultural backlash to the liberal global order. The result is that more and more people are turning inward and seeking protectionist policies and politics.

The second factor is the perception that an out-of-touch or corrupt elite controls politics. There is ample evidence that antipathy with government and the relinquishing of power to transnational bodies drive support for populist and nationalist agendas. Support for far-right nationalists increases with European integration. The perceived loss of control to foreign bodies allows nationalists to present themselves as the saviors of the true nation, and as change agents that can shake up the system.

The third driver of ethno-nationalist populism today is migration. More accurately, the perception that high levels of migration are threatening the economic security and way of life for members of host nations is leading people toward parties and leaders that push anti-immigrant policies. This “demographic anxiety” has led to the reassertion of a more ethnic, majoritarian nationalism in many countries. There are many examples here, from fear of migration as a key factor for those that supported Brexit to the Syrian refugee movements increasing attention on immigration and shifting European policy and politics over the last few years.

So why focus on the ethnic nationalism of today’s populism?

Trump’s pairing of populism with ethnic nationalism has been mimicked by many politicians across the West and around the globe. Understanding how these populists are trading on the currency of ethnic nationalism can help us better see what is behind their success, and thus to find policy responses.

In other words, seeing the whole picture here matters because how we diagnose the problem shapes how we respond. If we think that economic inequality is behind the rise of these movements, then new redistributive polices seem like the answer. If we think that political alienation is the culprit, then we will promote reforms to our political institutions. If we think that immigration is stoking fears that open space for these parties, then immigration controls seem like a viable solution.

Each of these factors very likely does have a role in stimulating support for populism. And so, economic, political and immigration reforms are going to be critical elements of thinking through the responses to populism. But, on their own, they will fall short of addressing the root causes.

At its core, today’s populism is propelled by politicians tapping into powerful ethnic identities to mobilize people. A longer view of history shows that at points of major transition, nationalists have been very adept at manipulating people’s unease to further their cause.

There is an emerging debate taking shape that seeks to tackle the role of ethnic nationalism in today’s politics. On one side are those that say we need to stop listening to the nationalists – that doubling-down on the liberalism and civic values of the post-war consensus will do the trick. On the other side are those that want us to give in to the darker sides of ethnic nationalism – embracing exclusionary and illiberal policies. The solutions from these two extremes leave us wanting, to be sure. But the more we can understand the role ethnic nationalism has played as a key driver of today’s populist moment, the more we will be able to think through how policies and politics can respond to combat its more dangerous elements.