Covid19 in Tunisia: A Country Adrift

Within a year of the Covid-19 epidemic starting in Tunisia, the North African country has turned from a widely praised example of efficient crisis management to the “bad boy” of the Arab region and of the African continent. While the lightning spread of the virus in the country is putting a strain on an already shaky healthcare system, reversing the downward spiral would require more than a health-based response. Indeed, tackling the multifaceted crisis that has gripped Tunisia for the last months head on, would mean everyone facing up to their responsibilities.

On 13 July, Tunisia reached 500,000 Covid-19 cases since the start of the pandemic in the country in March 2020, setting a new record on the ever more alarming list of health indicators that have shaped the Tunisian news over the last few weeks. With an average of about 7,000 new infections per day; a rate of contamination consistently above 30%; and almost 200 deaths daily – in a country of about 12 million – the sanitary situation has outstripped even the worst expectations. Registering the highest per-capita death toll and one of the highest per-capita infection rates in the Arab and African regions, Tunisia now finds itself in a nightmare scenario that the country’s authorities had hoped to avoid. What can account for Tunisia’s dramatic failure in its fight against Covid-19?

From anticipation to collapse

In the spring of 2020, the bold and preventive measures taken by the Fakhfakh cabinet had enabled the country to contain the spread of the virus and to limit the number of contaminations and victims (about 50 deaths). Though, note, the figures were probably underestimated due to the limited number of tests conducted at the time. 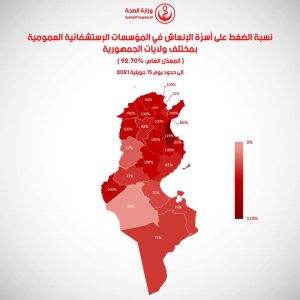 ICU beds occupancy in public hospitals in Tunisia by governorate (as of 15 July 2021). Source: Ministry of Health

Anticipation had been a keyword in the Tunisian government’s strategy to fight the Covid-19 epidemic in its early stages. Working in close coordination with the Scientific Committee and temporarily putting aside their disagreements and mutual mistrust, the Tunisian authorities had elaborated an effective strategy that placed the management of the crisis above political infightings – with relative success.

But the tide has since turned. After the first wave, the spirit of unity and the sense of commitment swiftly collapsed in the face of political and partisan calculations. After only five months in power, the Fakhfakh government was pushed out of office and was laboriously replaced by a technocrat cabinet, which would soon depart from the cautious path of its predecessor.

The country’s borders were reopened for the summer, which brought its own share of recklessness and negligence with, in particular, little monitoring of the confinement measures imposed on foreign travelers. Despite the return of epidemic levels of contamination in the fall, the time for cooperation and unity was over: embroiled in sterile power struggles, the new cabinet and other state institutions failed to offer a coordinated response to the new surge. They limited themselves, instead, to half-measures that would not prove particularly efficient. Within a few months, the authorities quickly lost control over the situation and the fragile healthcare system has now, as many feared it would, collapsed.

Today, most public hospitals throughout the country have reached or exceeded their functioning capacities, and their personnel show serious signs of distress and exhaustion. Field hospitals have been set up in the worst affected regions and medical supplies have been donated by Tunisia’s international partners. However, the country’s critical shortage of trained personnel to operate these additional structures and materiel – a consequence of the steady outflow of medical staff over the last few years – have hindered efforts to relieve the country’s overcrowded medical services.

This grim reality is even more deplorable that early warnings had been repeatedly given by the country’s scientific experts about the risks that the situation would get worse. This was especially the case after the (British) Alpha variant appeared in March 2021, and became dominant, only to be superseded by the recently identified (Indian) Delta variant that now prevails (60% of cases).

The emergence of more virulent variants has become even more of a concern in view of the slow takeoff of the Tunisian vaccination campaign, which began last March. The authorities had hoped to rely on an intensive vaccination campaign to fight the pandemic and to avoid imposing strict restriction measures. But to date, on the slightly more than 2.4 million Tunisians that have been inoculated, only some 825,000 have been fully vaccinated with two doses, i.e. a mere 7% of the total population. 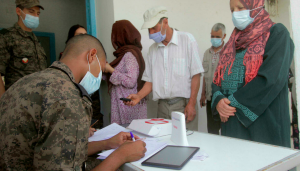 The reasons for the delay? The authorities’ unclear vaccination strategy; the population’s initial skepticism and an accompanying lack of information; and Tunisia’s overdependence on the Covax mechanism and other external donations. The country only received some 600,000 doses out of the 4.3 million expected through Covax, and the slow and gradual reception of the doses continues to hamper mass vaccination. With now close to 3.6 million Tunisians registered on the national vaccination platform Evax, the number of doses available as of 10 July stands at slightly more than 300,000. New doses have been promised for later in July.

As such, the desperate pleas for help to the international community and more recently to the Tunisian diaspora for aid in the country’s fight against Covid-19 sound like an admission of failure from both the Tunisian authorities and citizens to face their responsibilities in the management of the sanitary crisis.

The blame for the catastrophic conditions currently faced by Tunisia can hardly be placed on one single actor or factor, though the authorities bear an important share of responsibility in this crisis.

The months-long political deadlock in which the country has been mired significantly limited the authorities’ capacity to efficiently handle matters. Coordination and communication between the various centers of powers would have been essential in this vital period. Instead, Tunisia has been presided over by ‘three heads’ (President, Prime Minister and the Speaker of Parliament) engaged in open political warfare; a truncated cabinet with no less than 11 ministers working on an interim basis; and a paralyzed parliament. Needless to say that both Tunisians and external observers have struggled to understand who, if anyone, is actually in charge. The Prime Minister, who has been under the fire for his mismanagement of recurrent social protests and particularly the recent incidents in the working-class Sidi Hassine quarter in the capital, has been especially conspicuous by his absence in the management of the sanitary crisis. The Minister of Health has, instead, taken up the slack, before being recently sacked without explanation.

Growing disagreement between the political leadership and the Scientific Committee also hampered any serious efforts in fighting the epidemic. While the Committee had played a central role in the successful management of the first wave, the neglect of its recommendations by the authorities, which it accuses of taking decisions based on political considerations rather than scientific reasoning, further fuelled tensions. In particular, the Committee’s repeated calls to impose a full lockdown to slow the spread of the virus and to cope with the Tunisians’ lack of compliance with social distancing measures have been consistently rejected. Officially, because of the socio-economic costs of this measure; but, unofficially, because the unpopularity of a lockdown would undermine the shaky popularity of those in charge. 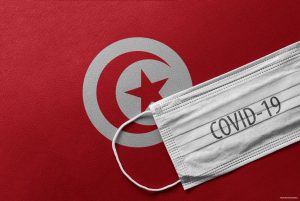 Solving the complex equation between the need for strict measures to contain the epidemic and the country’s socio-economic reality was a challenge for the previous cabinet as it has been for the current one.

Objectively though, the country’s economic situation today is much worse than it was a year ago, and Tunisia has no resources left to boldly fight the epidemic. It cannot sustain the financial costs of a full lockdown, nor can it strengthen its medical capacities and buy additional vaccine supplies. In a country on the brink of bankruptcy and where the informal sector accounts for between 30 and 45% of total employment, imposing a complete lockdown would be economically unsustainable for the State and for a large share of the Tunisian population. Experts have also warned against the risks of a new social explosion.

Driven by a general sense of frustration or of mere recklessness, the failure of Tunisians to comply with the restrictive measures and the recommendations issued by the authorities have also contributed to the worsening situation. Until recently, there has been a striking discrepancy between the pressure endured by the country’s medical services and the reality out on the streets. Crowded markets, busy coffee shops, and social gatherings have been the norm over the last several months, despite the rising death tolls and the ever louder alarm bells rung by health experts. Citizens’ reluctance to abide by even the most basic rules, such as mask wearing and social distancing, combined with the authorities’ laxity in enforcing these measures and sanctioning infringements have reinforced a widely shared sense of impunity. Moreover, the division and amateurism displayed by the ruling class, who have themselves often ignored rules and shown a lack of responsibility, further weakened the bond of trust between the Tunisian citizens and the political elite. The latter lost the moral authority necessary for imposing rules, and lacked the credibility to take up a proper leadership role in the crisis.

In search of a new strategy

Faced with a critical situation and with limited margins for maneuver, the Tunisian authorities have looked for a new approach to regain control over the epidemic. Their belated understanding of the seriousness of the situation hardly makes up for the negative consequences caused by their failure to prepare. But a new spirit of firmness may still allow them to save the day.

Having failed to develop a comprehensive national strategy in fighting Covid-19, the government had rather opted for a more targeted approach, leaving it to the local authorities, and in particular to the governors, to take measures according to the sanitary situation in their localities. As a result, an increasing number of delegations and governorates have lately imposed restrictive measures, including full or partial lockdowns. It is unclear whether delegating authority was a way of guaranteeing greater effectiveness on the ground, or as a way for the government to offload its responsibility. What is certain, however, is that it has allowed for more fluidity in the decision-making process than had been the case at the state level.

The strengthened role of the military, not only in ensuring the stricter enforcement of the sanitary restrictions and in supporting the healthcare services, but also in boosting vaccinations, has also started to have some positive results. The army’s logistical capabilities have been especially useful in reaching remote parts of the country, notably in the deep south, where people have had difficulties in accessing vaccination centers. The Ministry of Defense called as well for the conscription of recent medical and paramedical graduates to fulfill their national service by supporting the country’s “war against coronavirus”.

Furthermore, the long expected law on the state of the health emergency, which would empower the government to take exceptional measures to fight the epidemic, was eventually adopted in a cabinet meeting held on 8 July, but it still needs the parliament’s approval to enter into force. In the meantime, in view of the saturation of the healthcare services, the authorities’ inability to bear the socio-economic costs of a countrywide lockdown, and the absence of sufficient vaccines to achieve herd immunity, the only agreed conclusion reached by both the political authorities and the health experts is that Tunisians must first and foremost rely on themselves in the fight against Covid-19.

– Covid 19 in Tunisia: Beyond the health crisis, a socio-economic challenge (9 April 2020)