The future of Jerusalem 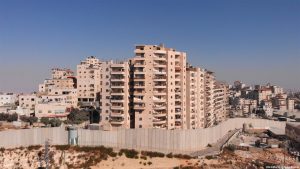 The Trump administration made its intention towards Jerusalem clear when in 2018 it relocated the US Embassy from Tel Aviv to Jerusalem. In accordance with Peace to Prosperity, the borders of Jerusalem will be set to remain along the separation wall that Israeli has already unilaterally built. This, it states, will create an ‘un-divided’ Israeli capital in Jerusalem to the West of this wall, allowing for a Palestinian capital behind the wall:

‘The sovereign capital of Palestine will be in the section of East Jerusalem located in all areas East and north of the existing security barrier, including Kafr Aqab, the eastern part of Shu’fat [the refugee camp] and Abu Dis, and could be named Al Quds [Arabic for Jerusalem] or another name determined by the State of Palestine’ (p.17).

The separation wall which cuts through Jerusalem segregates multiple neighbourhoods and communities from their city, with access controlled through a series of heavily militarised checkpoints. Although these areas, including Kafr Aqab, Hizma, and the refugee camp of Shu’fat all technically fall under the administration of the Israeli run Jerusalem Municipality, no services  are provided to these areas on ‘security grounds’. The Palestinian Authority are concurrently prohibited from offering any service provision to these neighbourhoods. This includes, inter alia no policing, no waste removal, and no access to regulated water and electricity supplies. Thousands of Palestinians continue to live there, in unstable buildings and without access to services, because these neighbourhoods are their homes, and because leaving the area of the Jerusalem Municipality would mean revoking their right to Permanent Residency and access to the rest of the city.

The plan proposes three options for citizenship for Palestinians in Jerusalem: that they become citizens of Israel (which is almost impossible); that they ‘embrace their political identity’ and become citizens of the Palestinian state; or that they retain their status as permeant residents. There is, of course, no mention of the challenges of retaining permanent residency, and extensive efforts the Israeli state go to revoke the residency of Palestinian Jerusalemites. If the PA are allowed to resume service provision in these areas of East Jerusalem behind the wall, it seems likely that it will only be a matter of time before the Israeli state revokes the prospect of ‘Jerusalem residency’, in exchange for an ‘East Jerusalem residency’, which will keep these Palestinians firmly locked in behind the wall without access to the rest of the city. 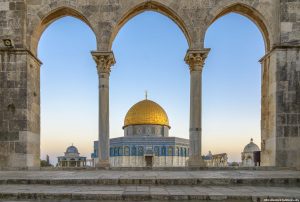 The second major point in relation to Jerusalem concerns the 8th century site of the Al Aqsa mosque, the third most holy site in Islam. Since 1967, the Jordanian Islamic Waqf has been in charge of the holy site, to which non-Muslims are only allowed to visit during specified hours, and are not allowed to pray there. Endemic of the neo-colonialism with which this plan seeks to dismantle decades of history with footnotes and asides, a note page 16 states that “people of every faith should be permitted to pray on the Temple Mount/Haram al Sharif’. This is in fact a major clause snuck into the plan, which is potentially devastatingly inflammatory. During the speech outlining the plan, Trump referred to the Al Aqsa mosque (the third most holy site in Islam) as the ‘Al Aqua’ mosque. Alongside the rapid production of memes portraying Al Aqsa as a water park across twitter, tens of thousands of Palestinian worshippers made their objection to the plan clear as they attended the first Friday prayers after the announcement of the plan.