The Problem of Gaza 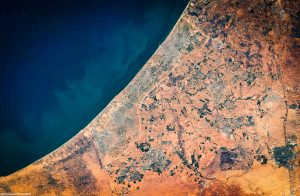 While some of the discussions and proposals are somewhat couched in ambiguity, the language adopted in discussion of the Gaza Strip could not be more direct. Described from the contents page as ‘The Problem of Gaza’, the document has a linear narrative: until Hamas, PIJ and ‘other terrorist entities’ are dealt with, nothing is going to change for Palestinians in the Gaza strip.

Peace to Prosperity is peppered with references of faux solidarity with Palestinians, particularly those in Gaza, who are cast throughout as victims without agency, ‘bullied into submission’ by Hamas (p.25) and caught up in a meta-game in international politics. The document concurrently presents Gaza as ‘a very complicated situation’ (p.6) and one which entirely revolves around its Hamas leadership. Hamas are accused of having ‘brutally repressed Palestinians and diverted hundreds of millions of dollars meant to improve Palestinian lives into fuelling a war machine’ (p.13). Maintaining a racist and unfounded narrative of rejectionism, in which Hamas are unwilling to negotiate, they are accused of maintaining a humanitarian crisis in Gaza for their own political gain. 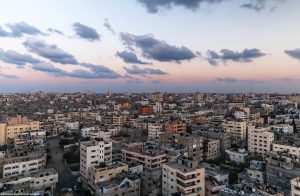 The plan touts a variety of enormous hypothetical investments which would be made in the Gaza strip, should Hamas agree to disarming ceding authority over the enclave. This bizarre amalgamation of proposals for Gaza (many of which are recycled from previous negotiations and have been firmly rejected by Palestinians) includes hundreds of millions of dollars proposed to revamp the Gaza Power Plant (bombed by Israel in 2014); a proposal is made to construct an artificial island off the coast of Gaza five years following the signing of a deal to create ‘The Gaza Port’ (which would concurrently render defunct any Palestinian access to the existing ports of Haifa and Ashdod), as well as a small airport for the Gaza strip (the existing airport which was built in 1998 following the Oslo Accords was shut down in 2000 and destroyed by bombing in 2001). Palestinians in Gaza are promised an expansion of the enclave, to include two subsequent ‘territories’ (conceptual map)which will become new hubs for industry, agriculture and housing – failing to mention that these proposed areas of land are in fact nuclear waste sites. A specially constructed underground tunnel linking Gaza and the West Bank is proposed to stich the territories together, allegedly creating a unified Palestinian state. All the while, Israel will retain full control of the parameters of the Gaza strip, including retaining control over the sea surrounding the coastal enclave. 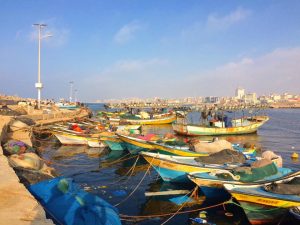 Of course, none of this pick’n’mix selection of treats will be on the table until Gaza is ‘ruled by a governance structure that allows the international community to safely and comfortably put new money into investments that will not be destroyed by predictable future conflicts’ (p.13).Section Nine, titled ‘Gaza Criteria’ makes clear that there will be no change in the status quo for Gaza until the democratically elected Hamas party cede control over Gaza; Hamas and PIJ are disarmed; and the Gaza strip demilitarised. Throughout this framing, Israel is absolved of any agency in connection to the political, economic and social realities of life in Gaza today. This is not new – but it is both factually and legally inaccurate.  Not once is there mention of the blockade on Gaza, now in its thirteenth year; or of the three major military attacks on the Gaza strip in the last decade that have displaced more than two thirds of the population internally and left tens of thousands dead and wounded; or of the UN Human Rights Commission of Inquiry investigation into Israeli war crimes and crimes against humanity committed since the 2018 Great March of Return in Gaza. Instead, the plan for Gaza presents a selection of reductionist, racist and largely recycled ideas from previous negotiations, grounded on neo-liberal assumptions that flagrantly ignore the fundamental principles of human rights.