Acceptance of Refugees and Solidarity in the EU

The European Union is still feeling the reverberations of the 2015 migrant crisis, which sowed deep divisions among member states about the acceptance of refugees and migrants. Against this background, the Ukraine crisis has triggered the largest inflow of refugees in Europe since the second world war.

As part of the ERC Synergy Project SOLID we have mapped and explored public opinion about refugee displacement from Ukraine in five EU member states (France, Germany, Italy, Poland, and Hungary). Our questionnaire was administered between March 11 and April 5, 2022, with a total sample size of 10,229 respondents. This blog compares these recent results with those from a previous survey, administered between June and August 2021.

Our results show that Europeans are welcoming of Ukrainian refugees, although this varies by country. Acceptance of migrants has grown since 2021 in all countries except for Hungary, as has the support for sharing responsibility for refugees among EU member states, again except for Hungary. 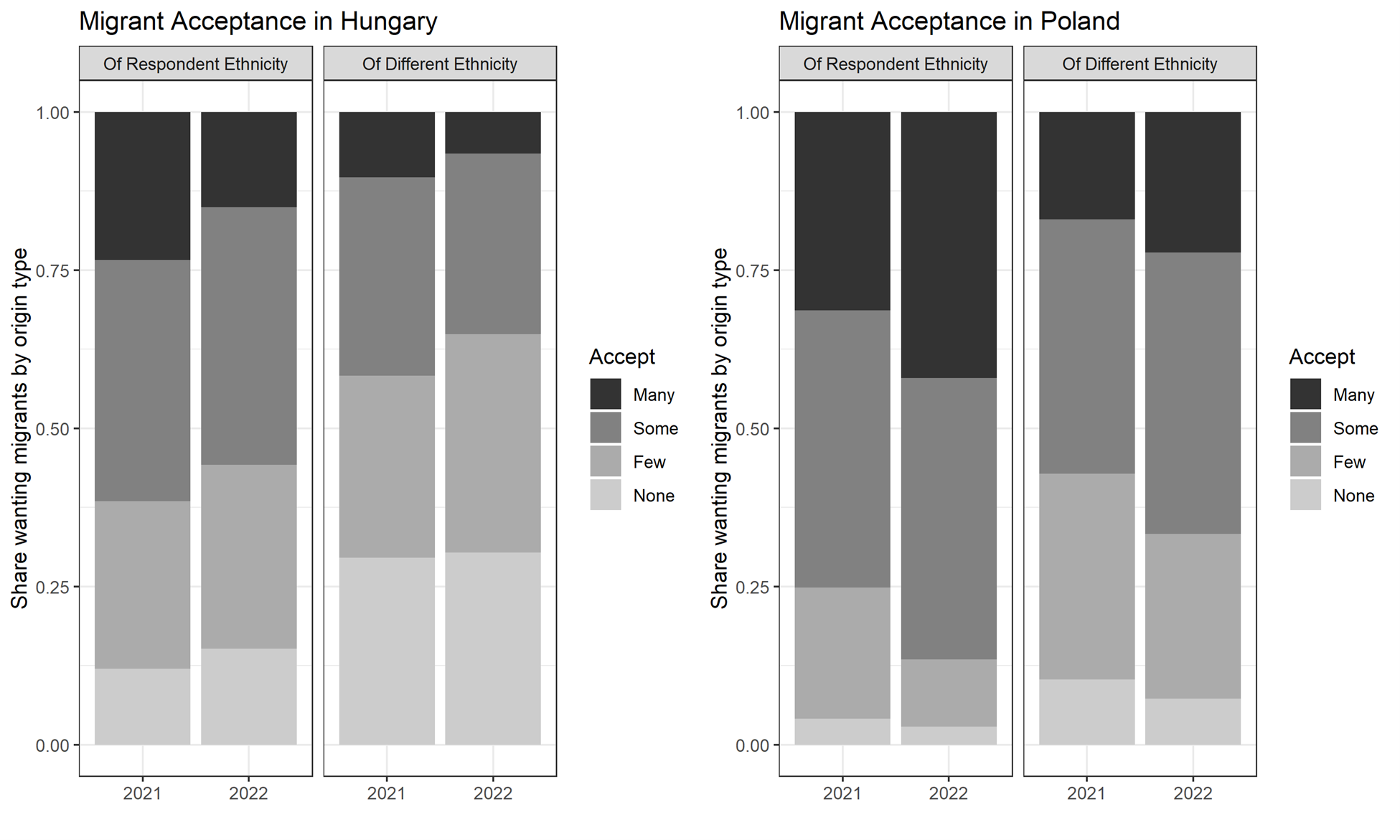 Figure 1 shows the percentage of respondents in Poland and Hungary showing different levels of acceptance of migrants by whether the migrants are of the same ethnic background as the respondent, or of a different ethnic background. The bars indicate the relative number of respondents saying that their country should accept none, few, some, or many migrants. Data are shown before the war (summer of 2021) and after the start of the war (spring 2022).

Migrant acceptance shows a first big divide between Hungary and Poland. In 2015 Hungary was a country through which many migrants transited, while Poland was a bystander country, receiving fewer migrants even in transit. Poland more recently faced tensions with the Belarussian government, which it accused of “weaponizing” migrants as part of its wider dispute with the EU. In the current Ukrainian refugee crisis, both countries are frontline states, with Poland receiving the vast majority of Ukrainian refugees.

Already in 2021, Poland was more welcoming of migrants in general, compared to Hungary. This discrepancy further increased after the start of the war, most noticeably when it comes to migrants of a similar ethnic group. Hungary by contrast saw an overall decrease in support for migration, being the only country in our sample showing this trend. This speaks to the power of elites influencing public opinion, as Hungary’s Prime Minister, Victor Orban, has consistently criticized Ukraine and its president.

Irrespective of these differences, both Hungarians and Polish publics prefer migrants that are of the same ethnicity as themselves. By contrast, the difference in acceptance between migrants of the same ethnicity and of different ethnicity, is lower in France and Italy. This is consistent with previous rhetoric from populists in Hungary and Poland against Muslim migrants. Poland in particular shows a high level of acceptance of migrants that are of the same ethnic background. Respondents were possibly thinking of Ukrainians more specifically. Hungary stands out as the most anti-migration country. 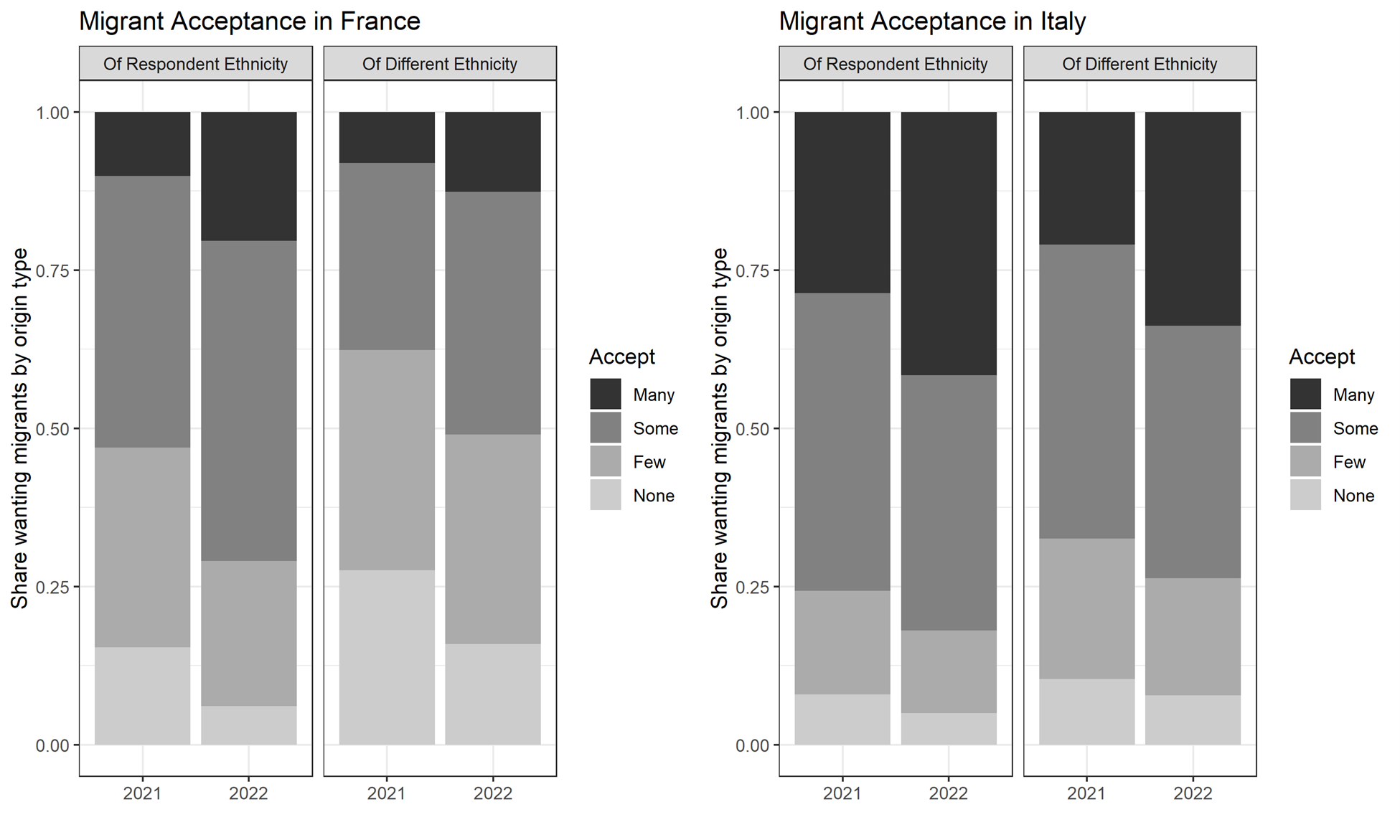 In Figure 2, France and Italy show a similar pattern. In the previous refugee crisis Italy was a frontline state, receiving large numbers of migrants and refugees crossing the Mediterranean. France was a destination state for many of the migrants. In the current refugee crises, both countries might be considered destination states. Italy in particular is expecting large numbers of Ukrainian refugees given that there is already a sizeable diaspora.

In general Italians seem much more open to migration of both types than the French. However, in both countries there is a majority of the population willing to accept at least some migrants even of a different ethnicity than theirs. In both countries, the acceptance of migrants has increased since the start of the war.

Support for Ukrainian Refugees is Higher than for Other Groups 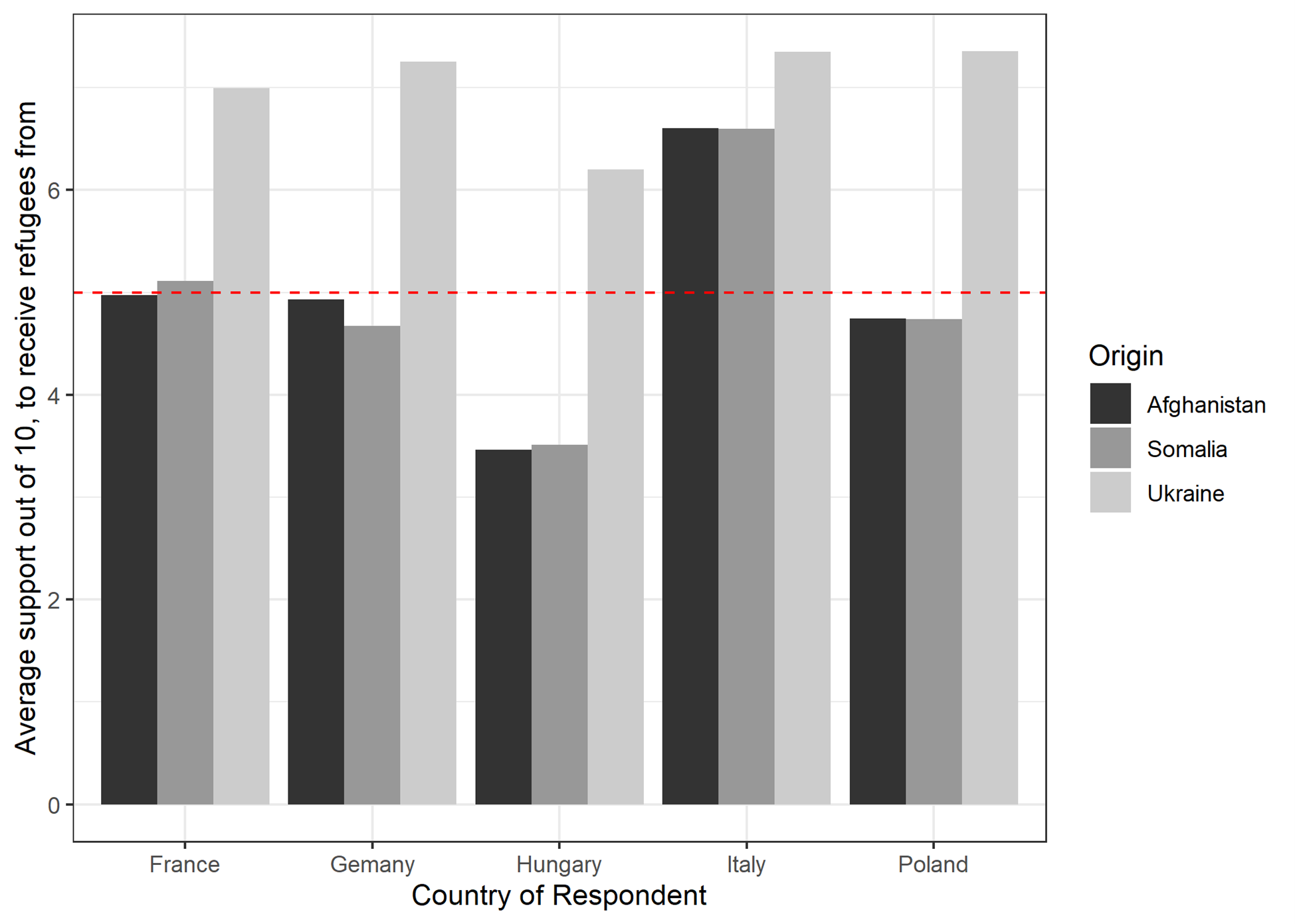 Figure 3 shows the support for refugees fleeing wars in different countries. The bars indicate the average response per country on a 10-point scale asking respondents to what level they agree with receiving refugees from particular countries, with higher values indicating higher levels of agreement. A horizontal red line shows a cut-off point at 5, which can be considered neither agreeing nor disagreeing.

What can be seen is that across the five countries, Ukrainians enjoy much larger levels of support than refugees fleeing from Afghanistan or Somalia. The largest gap can be seen in Hungary, which also has the lowest levels of acceptance overall. Large gaps can also be seen for Poland and Germany, with the smallest gap in Italy which also has the largest levels of acceptance overall. On average, respondents in the five countries are ambivalent about accepting refugees from Somalia and Afghanistan, while there is a clear high level of acceptance of Ukrainians.

There can be many factors that explain this gap. One is that the Ukrainian war is much closer and might be perceived to be more urgent. Europeans might feel more responsible towards their neighbours as opposed to countries that are further away. Poland and Hungary in particular might feel a shared sense of history with Ukraine and shared sense of perception of the treat from Russia, resulting in more empathy with the plight of Ukrainian refugees. Ukrainian refugees, in contrast with other groups, are mostly composed of women and children, which might generate more sympathy. However, as Figure 2 shows, there is likely also an ethnic component to this preference. Ukrainians can be perceived as more similar to respondents given their skin colour and religion. Poland in particular has previously made clear that they prefer Christian to Muslim refugees. Indeed, there have also been reports that people of colour that were living in Ukraine had more difficulties crossing the border to Poland and Hungary.

Figure 4 shows the average response by country on a 10-point scale to two questions asking respondents who should be accommodating refugees. The dark bars show the response to whether refugees should be primarily hosted in the country of entry, while the light bars indicate agreement to sharing responsibility among all EU countries. A horizontal red line indicates a cut-off point at 5, which can be considered neither agreeing nor disagreeing.

The first thing to notice is the overall negative response to both questions by Hungarians, which further indicates their resistance to any refugees. Given that Poland has received the vast majority of refugees, Hungary’s resistance to responsibility sharing might indicate that it does not want refugees that are currently in Poland, despite the fact that Hungary is also a frontline state.

Respondents in other countries seem to agree that they prefer some type of responsibility sharing. Interestingly, Italy shows the largest consensus that refugees need to be accommodated by all EU member states, despite the fact that Italy is now a destination state and not a frontline state. This might speak to the experience of Italians having been a frontline state before, and suggests that it is not simply self-interest but now a more general policy preference. 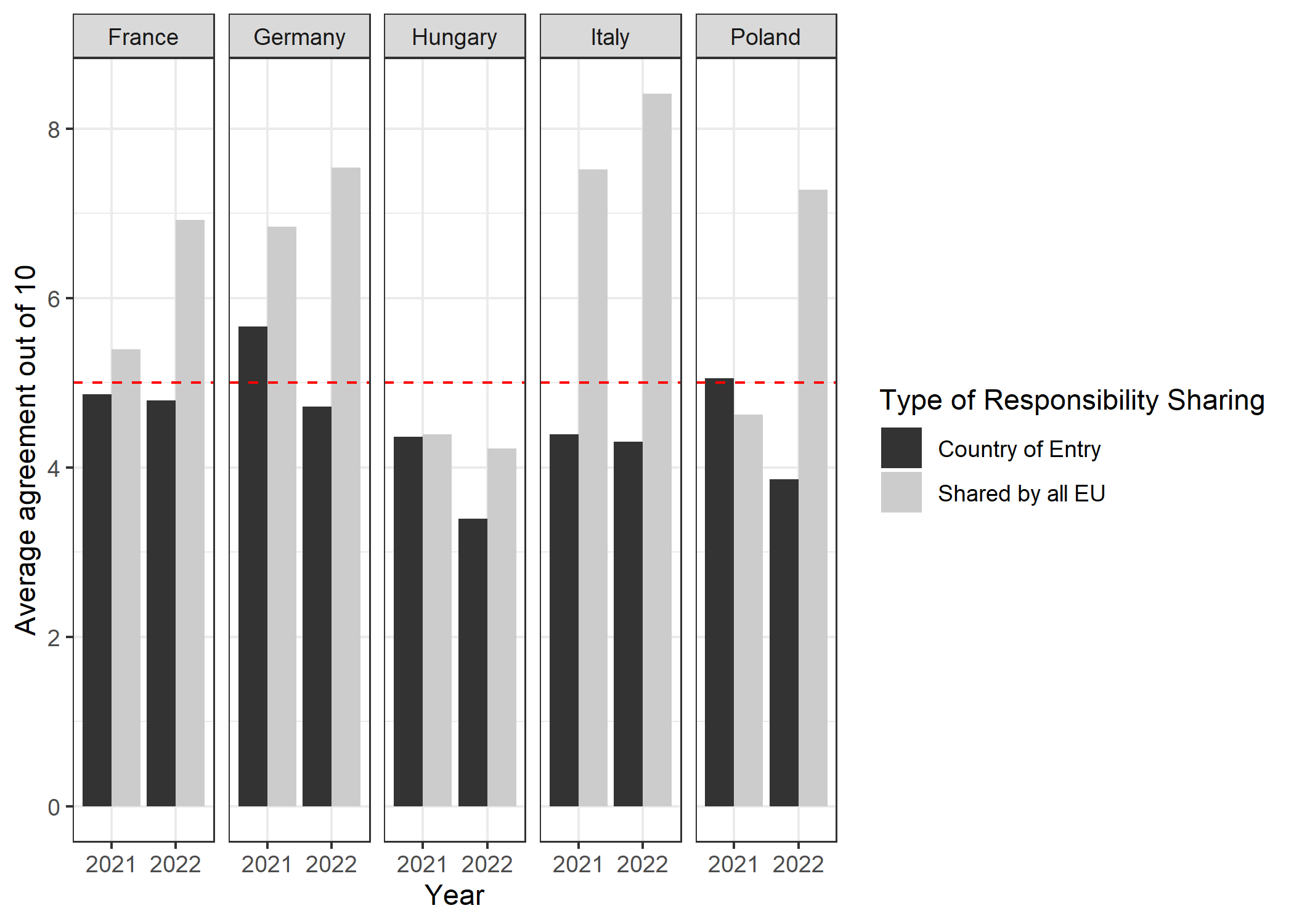 Surprisingly, Poles do not show more disagreement that refugees should stay only in the country of entry, despite the vast numbers of refugees it has taken. This speaks to Poland’s overall acceptance of Ukrainian refugees.

In summary, our research shows an increase in support for responsibility sharing compared to 2021, except in Hungary. While Italy has broadly maintained its stance, we see a reversal in Poland towards wanting more responsibility sharing, likely due to its change in status from a bystander to a frontline state.